(Written by Jake and Sarah)

Walking in to Mang Inasal, a restaurant here in Bacolod which specializes in marinated grilled chicken, we gathered at the front to place our order.
We looked around the room, it was fairly crowded that day.  The general buzz of activity hanging thick in the air....
Jake sauntered off confidently to find us an open table.  Once the order was placed, we went to take our seats, only to realize he had found a table without enough seats.  Upon this realization, the grown ups retreated to a table behind us.  He, however, had realized that there were no tables available with enough seating and so therefore had strategically chosen two open tables beside each other...
While waiting for the chicken paa (leg) and chicken pecho (breast) to arrive, we heard a deafening whoosh of the release of pressurized gas emanating from behind the counter.
Panic and chaos broke out all through out the restaurant; people screamed and ran for the doors.  Children were pulled behind tables and chairs as they were covered by their parents bodies; mothers clutched babies.
The boys and I sat, watching bemusedly as people rushed passed us.  We glared danger right in the eye and dared it to come for us.
Almost as suddenly as the panic had come, it drifted away, and the restaurant was ushered back into normality.  The next few minutes were spent calming children and resuming previous activities. People chatted nervously about the harrowing experience.
The boys and I slowly began to chuckle as it was discovered that the event had been, in fact, a hose that had popped off the CO2 tanks for the soda machine.
Jake looked around the room at the frazzled customers and back at us and let out a stiffled laugh, for he out of all of us had faced it with an air of nonchalance and fearlessness.

As the Luthers say, "This is life in the Philippines." 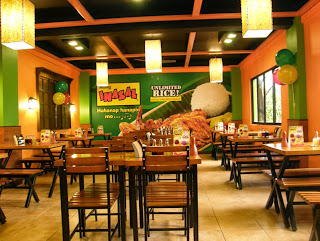 Posted by Michael and Sarah Jones at 6:06 AM

What, then, shall we say in response to these things? If God is for us, who can be against us? He who did not spare his own Son, but gave him up for us all—how will he not also, along with him, graciously give us all things? Who will bring any charge against those whom God has chosen? It is God who justifies. Who then is the one who condemns? No one. Christ Jesus who died—more than that, who was raised to life—is at the right hand of God and is also interceding for us. Who shall separate us from the love of Christ? Shall trouble or hardship or persecution or famine or nakedness or danger or sword? As it is written:

“For your sake we face death all day long; we are considered as sheep to be slaughtered.”

No, in all these things we are more than conquerors through him who loved us. For I am convinced that neither death nor life, neither angels nor demons, neither the present nor the future, nor any powers, neither height nor depth, nor anything else in all creation, will be able to separate us from the love of God that is in Christ Jesus our Lord.

Michael and Sarah Jones
We believe God has called every Christian to step out in faith beyond what the world, and even what most churches can see. We believe God calls each of us to be missionaries and ministers wherever we are. Our hearts are to reach the world through the love of Christ; especially to kids and young adults! God has opened SO many doors and shown how miraculous He is in our own lives. We have faith that he will protect and provide for us, and have confidence that through Him, ALL things are possible. Currently we are located in Metro Manila, Philippines and EAGERLY look forward to serving him here and see what he has planned for us next. Our desire is to serve him anywhere and everywhere.